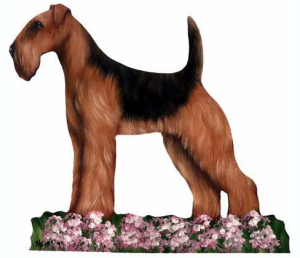 BRIEF HISTORICAL SUMMARY: The Airedale Terrier is a native of Great Britain, from the county of Yorkshire, it is reputed that the Airedale Show gave the breed its name. Many ‘Waterside Terriers’ from the valleys of the rivers Wharfe, Calder and Aire were exhibited at this show, making up a large entry. He is the largest of all the terrier breeds and encompasses all the characteristics of this group of dogs, he is also known as the King of Terriers.

The Airedale Terrier has remarkable scenting powers and has been used in Africa, India and Canada for tracking, has aided the Red Cross in times of war and has seen service with police and in the armed forces of both Britain and Russia.

GENERAL APPEARANCE: Largest of the Terriers, a muscular, active, fairly cobby dog, without suspicion of legginess or undue length of body.

BEHAVIOUR AND TEMPERAMENT: Keen of expression, quick of movement, on the tiptoe of expectation at any movement. Character denoted and shown by expression of eyes, and by carriage of ears and erect tail. Outgoing and confident, friendly, courageous and intelligent. Alert at all times, not aggressive but fearless.

HEAD: Well balanced, with no apparent difference in length between skull and foreface. Free from wrinkles.

Skull: Long and flat, not too broad between ears and narrowing slightly to eyes.

Muzzle: Foreface well filled up before eyes, not dish-faced or falling away quickly below eyes, but a delicate chiseling prevents appearance of wedginess or plainness.

Jaws / Teeth: Upper and lower jaws deep, powerful, strong and muscular, as strength of foreface is greatly desired. No excess development in the jaws to give a rounded or bulging appearance to the cheeks. Teeth strong. Scissor bite, i.e. upper teeth closely overlapping lower teeth and set square to the jaws preferable, butvice-like bite acceptable. An overshot or undershot mouth undesirable.

Cheeks: Level and free from fullness. “Cheekiness” is undesired.

Ears: « V »-shaped with a side carriage, small but not out of proportion to size of dog. Top line of folded ear slightly above level of skull. Pendulous ears or ears set too high undesirable.

NECK: Clean, muscular, of moderate length and thickness, gradually widening towards shoulders, and free from throatiness.

Back: Short, strong, straight and level, showing no slackness.

Loin: Muscular. In short-coupled and well ribbed-up dogs there is little space between ribs and hips. When dog is long in couplings some slackness will be shown here.

Docked: Set on high and carried gaily, not curled over back. Good strength and substance. Tip approximately at same height as top of skull.

Forefeet: Small, round and compact, with a good depth of pad, well cushioned, and toes moderately arched, turning neither in nor out.

Stifle (Knee): Well bent, turned neither in nor out.

Metatarsus (Rear pastern): Hocks well let down, parallel with each other when viewed from behind.

Hind feet: Small, round and compact, with a good depth of pad, well cushioned, and toes moderately arched, turning neither in nor out.

GAIT / MOVEMENT: Legs carried straight forward. Forelegs move freely, parallel to the sides. When approaching, forelegs should form a continuation of the straight line of the front, feet being same distance apart as elbows. Propulsive power is furnished by hindlegs.

Colour: Body saddle black or grizzle as is top of the neck and top surface of tail. All other parts tan. Ears often a darker tan, and shading may occur round neck and side of skull. A few white hairs between forelegs acceptable.

Any departure from the foregoing points should be considered a fault and the seriousness with which the fault should be regarded should be in exact proportion to its degree and its effect upon the health and welfare of the dog.

· Any dog clearly showing physical or behavioral abnormalities shall be disqualified.

· Male animals should have two apparently normal testicles fully descended into the scrotum.

· Only functionally and clinically healthy dogs, with breed typical conformation, should be used for breeding.